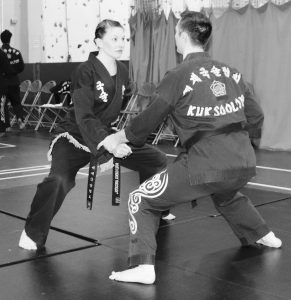 It’s that time of the year with tournaments being held that we often witness a select number of students winning gold medals and titles, year after year. But what many people do not recognise, it isn’t just talent alone that brings success. I’ve often heard people describing these individual students as being “naturals” “gifted” or even “privileged,” however the real truth is most of them have adopted the mentality of ‘winning.’

A world-renowned coach once said, “The body has limitations, but the mind does not—we focus so much on the physical aspects we forget that it all starts in the mind.

So what is a winner’s mind-set?

There are several characteristics, which I believe make-up a winning mentality.

Many champions are very optimistic and understand that things often turn out well if they work hard and believe it can happen. A pessimistic practitioner will often focus on the struggles, the adversity and obstacles; in many situations this person is his or her own worst enemy. They always see the glass as being half empty, as opposed to the optimistic student always views their glass as not just half full, but completely over-flowing.

Characteristic No 2 – Never Give Up Attitude.

Adopting a never-give-up approach isn’t something that people gain after obtaining success; it is something that’s developed along the way. I have often considered persistence and perseverance two of the major attributes to success with the ability to never quit, even when the going gets tough.

Characteristic No 3–A Burning Desire

Having studied the works of Napoleon Hill for many years, the first step in his renowned book, Think and Grow Rich is all about Desire. Napoleon Hill said, “Desire is the starting point of all achievement, not a hope, not a wish, but a keen pulsating desire, which transcends everything.” The truth is if you want something bad enough you will stop at nothing to achieve it.

The mental exercise of visualising is a prominent routine that winning athletes carry out. Many champions train themselves in the deliberate practice of seeing what it is that they desire. They also view their own performances with perfection. Many already picture themselves with a gold medal in their possession. There’s a great saying… “If you can see it in your mind – you can hold it in your hand.”

You can’t just think your way to success, at some point you have top take action. Small daily incremental steps, performed over a period of time often leads to extraordinary results. Perfect Practice, Makes Perfect.

To summarise; there are many components that contribute to being a gold medal winner and an overall Grand Champion. I have listed just a small selection of these recognised traits. Overall, if you can adopt just a few of the above methods, you’ll be far closer to achieving positive results than many of your fellow competitors.